Linux Is A Better OS Option For A Desktop Computer

With big tech's moves in the news today, it's now even more important to consider free Linux for your operating system. See Why Linux is a better option for a desktop computer.
Due to lockdowns there are part shortages in the supply chain, we should be able to find FAST alternative/better parts for the computer builds where necessary. Please contact us if you wish to know in advance of ordering if there are any changes/upgrades to the builds. Thanks!

How to choose a Video card
Next Page

How to choose a CPU Chip Processor for a PC

The place to start in choosing a CPU is to think about the CPU upgrade path. You should easily be able to upgrade the CPU you choose now, by simply dropping into your motherboard a faster CPU in the future when its price has fallen. Thereby extending the life of your PC. To do this make sure the motherboard you choose today has a CPU socket that will fit the latest high end CPUs or even yet to be released CPUs. 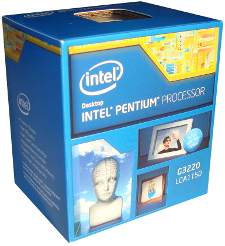 Given how fast CPUs are today you really don't need to spend more than around $50 to $65 dollars for a mainstream PC CPU. As an example a current Intel Celeron CPU or an AMD Athlon Processor with Radeon Vega 3 Graphics that costs around $60 can perform all the mainstream tasks you want without a meaningful performance difference compared to a $200 or $300 or even a $1000 CPU!

For an ultra gaming or workstation or server it's $300 and higher for the CPU.

Clock speed, number of cores, hyper threading and CPU architecture are main features to consider. Power consumption and overclocking potential are other factors. You're getting the best of these features automatically by getting CPUs for the motherboard sockets mentioned above.

One focus today on improving CPU processing performance is by placing more CPU cores on a chip. At this time, this includes up to 12 cores 24 threads for desktop CPUs, 32 cores 64 threads for high end desktops/workstations and more for server CPUs including 56 cores 112 threads.

Hyper threading is a CPU feature that simulates doubling the CPU cores without adding more physical cores, keeping the cost down. It saves money and does the job well.

2 cores 4 threads is fine for mainstream computing. Gamers should aim for at least 4 cores. Workstations need more cores to crunch through heavy workloads.

With regard to clock speed or frequency, which is still a very important factor, we believe gamers should get a clock speed of 3.0 GHz or higher. For mainstream users even 2.0 GHz is fine. Computer enthusiasts can often overclock these CPUs to get a higher clock speed than just the CPU's rated speed. Overclock, but carefully. Low wattage CPUs need a lower clock speed to keep cool in fanless configurations.

Integrated Graphics in the CPU

CPU for a mini PC

Since technology changes so fast, instead of listing CPUs here for different categories of PCs please refer to our current builds which we keep current, we'll link to them below.

CPU for a mainstream PC

CPU for an affordable gaming PC

CPU for a moderate workload workstation or server

CPU for a heavy work load workstation or server

How to choose a Video card
Next Page

Dec 2, 2021: Microsoft’s new Windows prompts try to stop people downloading Chrome - The Verge
“Microsoft has also been making it harder to switch default browsers in Windows 11 and forcing people into using Edge through Windows updates. These latest prompts also follow widespread criticism of Microsoft building a “buy now, pay later” tool directly into Edge that prompts users to use a short-term financing service.” - from the last para in that article.

Oct 8, 2021: Amazon Delivery Partners Rage Against the Machines: ‘We Were Treated Like Robots’ - Yahoo Finance
“They say work hard and make history, but Amazon is a culture of fear and anxiety.” - From the last line in that article.

Windows 11 Is Making It Absurdly Difficult to Change Browsers - GIZMODO
Don't these people at Microsoft behind this latest move know how to behave, it appears they never grow out of that mindset of cheap anti-competitive tricks, motivated by greed I guess or something else who knows, instead of just trying to do great stuff. Here try this instead Microsoft, create your browser, don't integrate it with Windows, make it available for download, market it like any other product, if it's any good people will use it, if not they won't. Don't force people to use it because you think you can get away with it. Weren't they told something similar by antitrust regulators sometime back, that article references that case, did they forget? - Kamil

Fired by Bot at Amazon: ‘It’s You Against the Machine’ - Bloomberg News
This is not good - Kamil

PC users are furious about the new Windows 11 design - Creative Bloq
Windows has been wanting to be Apple forever, constantly copying them, try and be original for a change, don't be afraid you're a big boy now, or maybe not lol - Kamil