FAST New Linux Desktop Computers. Big Tech Can Pretend It's The Only Option, It's Not 😀

Linux Is A Better Option For A Desktop Computer

With big tech's moves in the news today, it's now even more important to consider free Linux for your operating system. See Why Linux is a better option for a desktop computer.
Due to lockdowns, there are severe part shortages in the supply chain, please contact us to check stock of a PC before ordering. We should be able to find FAST alternative parts where necessary. Thanks!

How to choose memory
Previous Page

How to choose an SSD/hard drive
Next Page

How to choose a motherboard for a PC

The motherboard is the foundation of your build

The choice of motherboard (mobo) is critical because it determines which components you can or cannot install in your build. The mobo also determines how upgradeable and expandable your computer is in the future. 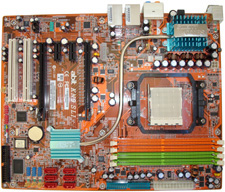 Before you even start you need to decide whether you want to use an Intel CPU or an AMD CPU. You can't install an Intel CPU on an AMD platform mobo and vice versa.

Next you need to decide which chipset you want on your mobo. A chipset is a bundle of chips on the mobo that gives it different features. The more features in the chipset the more expensive the mobo. Chipsets in the past were two chips, a north bridge chip and a south bridge chip, now it's a single chip.

The Intel H110 Chipset for Intel 6th generation CPUs has all the features you might need for a mainstream performance computer.

For an ultra gaming build with three or four graphics cards, or for a workstation or server for heavy work loads, consider the Intel X99 Chipset, which with a BIOS upgrade supports Intel Core i7 Extreme CPUs for Haswell-E and the upcoming Broadwell-E CPU architectures. The Intel X99 Chipset also supports certain Xeon CPUs for the Haswell-EP and Broadwell-EP CPU architectures.

For AMD Athlon X4 CPUs and AMD A-Series APUs the motherboard chipset to get is the A78 Chipset or A88X Chipset for gaming. For AMD FX CPUs get the AMD 990X Chipset or AMD 990FX Chipset for extreme gaming builds.

A short list of features we think a mobo should support include: 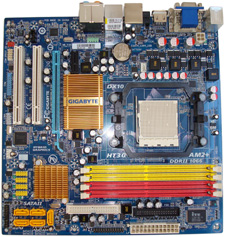 For computer enthusiasts it is important that the motherboard provides access to advanced BIOS settings to overclock our PC. Enthusiasts love to tinker to improve the performance of their PC and they can convert a great computer into an even better one through overclocking without spending more cash. You also need an overclockable CPU.

Micro ATX form factor is our recommended motherboard size for a performance PC. An ATX motherboard is recommended for an extreme gaming PC, to potentially accommodate multiple video cards.

Smaller is usually better in tech. Mini ITX form factor, smaller than micro ATX, is also very appealing but strangely enough these ultra small motherboards are still more expensive relatively in some cases. When prices fall in proportionate to size this would be a good option for a performance PC or HTPC (home theater PC). Mini-ITX is the recommended form factor for a mini PC.

How to choose memory
Previous Page

How to choose an SSD/hard drive
Next Page

Windows 11 Is Making It Absurdly Difficult to Change Browsers - GIZMODO
Don't these people at Microsoft behind this latest move know how to behave, it appears they never grow out of that mindset of cheap anti-competitive tricks, motivated by greed I guess or something else who knows, instead of just trying to do great stuff. Here try this instead Microsoft, create your browser, don't integrate it with Windows, make it available for download, market it like any other product, if it's any good people will use it, if not they won't. Don't force people to use it because you think you can get away with it. Weren't they told something similar by antitrust regulators sometime back, that article references that case, did they forget? - Kamil

Fired by Bot at Amazon: âItâs You Against the Machineâ - Bloomberg News
This is not good - Kamil

PC users are furious about the new Windows 11 design - Creative Bloq
Windows has been wanting to be Apple forever, constantly copying them, try and be original for a change, don't be afraid you're a big boy now, or maybe not lol - Kamil